What is Acceptance and Commitment Therapy (ACT)?

Today’s psychology focus in on Acceptance and Commitment Therapy (ACT). You will love this approach if you or someone you know is experiencing any one of these: 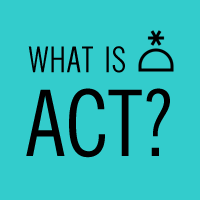 Acceptance Commitment Therapy (ACT), Dialectical Behavior Therapy, Functional Analytic Psychotherapy, and Mindfulness-based Cognitive Therapy are commonly referred to as the Third Wave of Behavior Therapy. The first wave started in the 1920s with behaviorists like Pavlov and his work on classical conditioning, and the second wave in the 1960-70’s with the Cognitive Behavior Therapy approach articulated by the Albert Ellis, whose Rational Emotive Behavior Therapy (REBT) worked to ameliorate negative core or irrational beliefs.

Two fundamental principles underscore the Cognitive Therapy approach: 1) how we think about events largely determines how we feel and act in response to those events, 2) distressing feelings and actions are often the result of thinking that contains “errors in logic.”

All Cognitive Therapy is based on the belief that humans’ basic motivation is to survive. It aligns with current research efforts in the area of Brain Elasticity and the basic premise that when you perceive a threat (real or imagined), the body gets triggered into “flight and fight,” otherwise known as the stress response. Over extended periods of time, this has a negative affect on your physical health.

ACT was developed by Steven Hayes, Kelly Wison, and Kirk Strosahl. ACT differs from Cognitive Therapy in that rather than trying to teach people to better control their thoughts, feelings, sensations, memories and other private events, ACT teaches them to “just notice,” accept, and embrace their private events, especially previously unwanted ones.

What happens in a ACT counseling session?

You will utilize reflections and interventions that teach “self-as-context” – meaning that you are always observing yourself and that your observing self is distinct from your thoughts, feelings, sensations, and memories.

Through dialogue and reflection, your counselor supports you to:

*accept your reactions and to be present to yourself versus attaching to your feelings and impulsively reacting
*strengthen your self-observation skills so that you can choose a “valued direction” based on your core values of yourself and life
*take action in the direction of your core values, which does not mean avoiding difficult feelings or memories or situations rather self-regulating, so that you are always in choice

1) Cognitive Defusion – learning methods to reduce the tendency to magnify thoughts, images, emotions or memories
2) Acceptance – allow a flow of thoughts to come and go and not get attached to them
3) Being present to the moment – awareness of the here and now, experienced with openness, interest, and receptiveness
4) Observing the self – accessing the transcendent self, a continuity of consciousness that is always observing and changing
5) Values – discovering what is most important to your authentic self
6) Committed action – setting goals according to values and carrying them out responsibly

The Science Beneath the Untethered Soul: Defusion by co-founder of ACT Steven Hayes PhD in the Huffington Post