The Sacred Solstice & Your Ritual of Becoming

We’re nearing the longest day of the year.

In scientific terms, the summer solstice occurs when the tilt of the Earth’s semi-axis is most inclined toward the sun, creating the longest day of the year in the Northern Hemisphere. After June 21st at 8:54 a.m. PT when solstice officially occurs, the sun will follow a lower and lower path through the sky each day in the Northern Hemisphere until it reaches the point where the length of daylight is about 12 hours. Winter solstice, which occurs somewhere between December 20th – 22nd, is the point in time when we are furthest away from the sun and experience the shortest daylight in the year.

If you’re like most women, somewhere inside your spiritual DNA is an ancestral memory, a consciousness that still feels the significance of these markers of celestial time even in a modern world. Why?

Once upon a time, our ancestors organized their entire society as one more expression of the natural world. They moved with the buffalo, foraged in valleys as food became harvestable, and adapted to the conditions and changing shapes just like the plants, trees, and animals that inhabited the earth with us. Time was marked on a quantum clock, whose hands were the movements of stars and planets, cycles of light and darkness on the earth, and the changing of the seasons.

For ancient civilizations, this day had great significance. It was a day critical to an agrarian calendar in which crops and seasonal cycles had to be managed, a day that was held as a spiritual celebration of light over dark, and therefore, life over death. 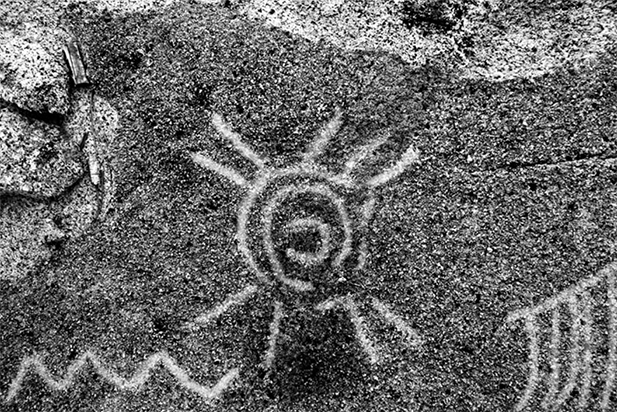 The people who inhabited Chaco Canyon in the Southwest desert built complexes and buildings and a massive sundial with petroglyphs known as the “sun dagger” to track not only the movement of the sun but also the moon. It took the limitless imagination of a female artist to crack the code where anthropologists could not.

Another of the world’s oldest evidence of the summer solstice’s importance in culture is Stonehenge, built in 3100 BCE (although scientists have just unearthed even older formations onsite), a megalithic structure which clearly marks the moment of the June solstice and much more.

As a human, you live intimately tied to the cycles of the earth as if you are “of” the earth instead of “on” the earth.

How will you pause and step out of a modern world that has lost its connection to this celestial clock and reconnect? What act of beauty will you create to honor the Summer Solstice? How will you give strength to your feminine creative and imaginative nature?

Consider joining forces with the energies of the universe and amplify the powers of creation within you on this auspicious day. Whatever you’re hoping for, dreaming of, and striving towards in life, the solstice is an invitation to step into your greatness exactly where you are right now.

There may be resources you have to gather, skills you have to acquire, and qualities you have to embody in order to harness the desire that is seeking to manifest and express itself as your next best self or life. You must be willing to relax into the heat of your inner sun that can burn like fire and use it as a crucible for what stands between you and your highest self.

How? Become the alchemist.

Alchemy (which appeared in the 1st century) is the scientific belief that lead can be heated and turned into gold. As a metaphor for the human condition, it means burning through the lead of limiting beliefs, fear, self-doubt, or perceived weaknesses and releasing your own golden light, your essential nature as pure spirit. Courage, confidence, and a sense of power to co-create your world with the forces of nature are what propel you into a life you never imagined.

So now I ask you: what do you need to burn through? What in yourself is currently standing between you and the outcome you hope for?

Set it aflame. Create a small ritual for yourself in which these attitudes or behaviors written on a piece of paper or painted into an image can be transported from this world to the next. Most importantly, be sure to also “seed” your desires by capturing the attitudes and behaviors you wish to grow and tend into being by planting this desire list or image in the fertile soil (the earth) of possibilities.

Let the celestial landscape of the summer solstice hold you and your prayers as you shoot them like an arrow into the heart of the holy.